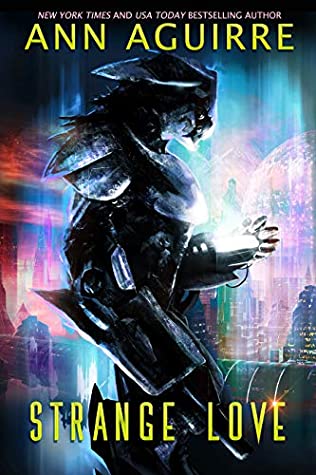 I bought this because it was recommended to me for one of my weekly features: What the Actual F*** Wednesday, where I ask people to recommend some of the weirdest erotica and romance novels out there. Also, Strangelove by Depeche Mode is one of my favorite songs ever and I like my romances with a generous side of pew pew pew.

STRANGE LOVE is a must-read for anyone who likes Regina Abel because the premise is pretty similar. Zylar, who sounds like something balloons might be made out of despite being a lizard man with a ruff, is seeking a mate as part of this pair-bonding program. However, his AI takes him to the wrong planet and he ends up rounding up a human and her dog from, you guessed it, Earth.

Beryl and Snaps are implanted with a primitive translation feature that allows the three of them to understand each other. Snaps's dialogue is BRILLIANT. My friend told me that it was like the dog from Up and she wasn't exaggerating. Snaps is seriously one of the best things about this book and his dialogue had me laughing so hard.

Unlike the Abel books, however, the alien bonding isn't that simple. Beryl has to go through a series of competitions and anyone can make a play for her, really. Including Zylar's jerk brother, Rhyzen (??? I forget his name-- mostly because I kept thinking of him as That One Flavork). TOF will do anything to get the strongest mate for himself, including playing dirty, which means Zylar's in danger.

I liked this book a lot-- although I did think it slowed down in the last act. I also really didn't care for the sex scenes. I'm sorry to those who liked them but I thought they were gross. My favorite things about this book were Snaps (#SnapsForPresident) and what a sweetheart Zylar was. HE WAS THE BEST AND WOULD DO ANYTHING FOR HIS WOMAN. Beryl was also a really strong heroine and I respected that, although I did think it was a little unrealistic how chill she was with her situation.

Overall, this was a relatively short and sweet book and I liked it. Not sure if I'd read further, though.