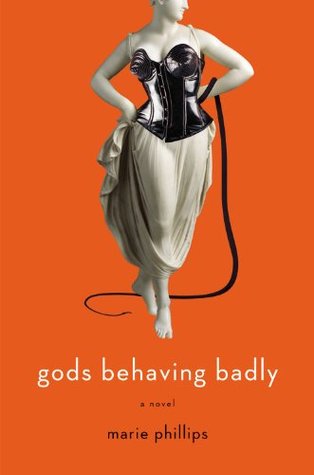 With so many books about Greek gods trending these days, I'm honestly surprised that nobody has rediscovered this hilariously British 2007 publication that's kind of like a mythological version of Dogma. In present-day Britain, the gods have headquartered themselves in London in a mouldering old Victorian mansion. Aphrodite works at a sex hotline, Artemis walks dogs, Dionysus runs a risque nightclub, and Apollo works as a television psychic-- when he's not seducing women and turning those who rebuff him into trees.

Artemis gets very, very cross with her twin brother when she meets a talking Eucalyptus with an Australian accent that was one of his failed conquests. She ends up swearing her brother to an oath that he will no longer harm mortals until their powers come back. Unfortunately, Apollo has also pissed off Aphrodite, who gets a very evil idea of getting her own form of revenge on him. One that involves a human girl named Alice and her son, the newly Christian pastor, Eros.

This is a very dark comedy that manages to capture the Greek gods in all their petty fuckery. A lot of the romances I've read really smooth over their faults. Not here. The Greek gods are dicks, and Phillips isn't afraid to show them at their pettiest. It makes sense, in a way, that if you live forever and have superhuman powers, your best source of entertainment would come from one-upping/humiliating those who have similar powers to you. It's also a hero's journey, which features Alice and her friend and maybe more, Neil, who is a very unexpected but still very endearing hero.

Be forewarned that this book does contain content others might not like. These are Greek gods, so there's allusions to sexual assault (on and off-page), sexual content and situations, lots of drinking (I feel like Dionysus's wine is probably grape Everclear), murder, dismemberment, and more. Nothing is particularly graphic but it's there. There's a happy ending, though, and some incredibly funny moments to balance out the darker stuff, so I would still recommend this to lovers of Greek mythology.