Crap at My Parents' House by Joel Dovev 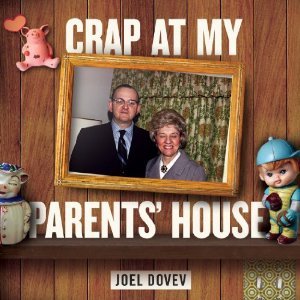 I got this book on impulse because the title made me laugh. When I was young, I was seeing this guy and I swear, his parents were the "whitest" white people I've ever met. They had an entire fridge in the garage just for diet Cokes, put Cool Whip and margarine and mayonnaise on everything, and every viable surface was covered with crochet and doilies. He had a senile grandmother who said the N-word to me at Thanksgiving (cringe), and at their Christmas party, there was chestnut-roasting and everyone wore matching sweaters. I thought I was white until I met this family and then I realized... well, I'm still white, but not the kind of white people make memes about.

This book is a celebration of that weird, vaguely Midwestern (but possibly Southern) breed of whiteness that macrames covers for toilet paper, has shot glasses with Hulk Hogan on them, and keeps fifty-year-old vials of Bengay in their medicine cabinet. It's tacky, but endearingly so, and the captions are utterly HILARIOUS. I think the author did such a good job pointing out things that were problematic (racist statues and figurines), gently mocking poor taste, making clever and genuinely witty puns, and just in general celebrating the weirdness. In one of my reviews of a similar "found/submitted" book of content, I said that a lot of these don't hold up because the dated humor ages poorly and ends up being really, really offensive in hindsight, but this book is really well done. It's just funny.

I'd recommend this to anyone who likes going thrifting and laughing at tacky decor, or enjoys having a quiet chuckle at things done in poor taste. It's not a mean-spirited book at all and this is one of the rare examples of a book where the captions are basically as funny as the photos. So much fun.