The Year We Fell Down by Sarina Bowen 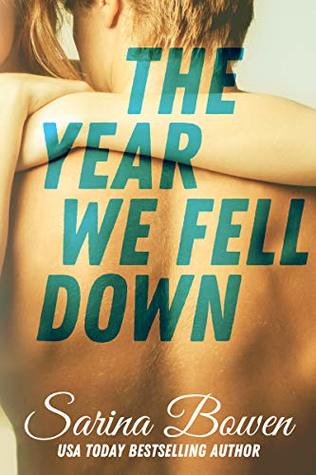 Before you guys all get mad at me for jumping ship yet again before the 15% mark, this is actually a reread. Not that I-- or anyone-- should be forced to justify a rating, but this is a book I actually have read cover to cover, and the first time I read it six years ago (back in 2015), I remember being pleasantly surprised and giving it a 3.5. Well, I don't know what twenty-something Nenia was thinking when she read this book, but thirty-something Nenia got to, like, page two before the "oh no" alarms started going off.

I have three big problems with this book. The first one is the disability rep, which I feel a little funny talking about since I am not disabled, but it felt like really, REALLY bad rep to me. The heroine keeps calling herself a gimp and speaking derisively of resources available to those with disabilities-- not to criticize, but simply to demean and deride, and to draw a line between her and others. The way she talks about the rehabilitation camp she was sent to was REALLY gross and the way she refers to herself is also really, REALLY gross.

Now, the heroine has only had her disability for a couple months and I get that with a lot of people-- especially people who were previously doing really physical things, as the heroine did with hockey, to the point where it becomes a core part of their identity-- there is a stage of grief, where people are forced to come to terms with what they've "lost" and adjust to their new approach to life. I think that is what the author was going for, and to an extent, I think it does work (she comes off as incredibly bitter but also trying to work her way through her trauma and adjust); I'm just not sure it was executed super well, and I think that some people might take serious issue with the rep.

The second thing that bothered me was the fact that the heroine is the OW. The hero has a girlfriend when we meet him and they're long-term. The way the author gets around this is by making the girlfriend a HUGE jerk. She's shallow, vapid, and mean, so any cheating-- and there IS cheating-- that happens between the hero and the heroine is "deserved." I just... if your girlfriend is that bad, break up with her and date someone else. Don't string people along and cheat. It's not fair to the girlfriend and it's not fair to the other woman. BREAK UP AND THEN GO OUT. Don't sneak around. I wouldn't be as bothered by this if the hero was supposed to be an arrogant jerk, but he's portrayed as Joe Nice Guy and I'm sorry, but if you're doing inappropriate things with two women-- including gifting your alleged "friends" sex toys as presents (yes, that's right)-- you're not a nice guy.

The third thing that bothered me about this book was the writing. The heroine has a "hope fairy" just like Ana's "inner goddess" from FIFTY SHADES OF GREY. I thought that was pretty uncool.

I don't want to take the mickey out of this book too much because I do think there was a serious effort to research accessibility and disability, I just really didn't like the romance.