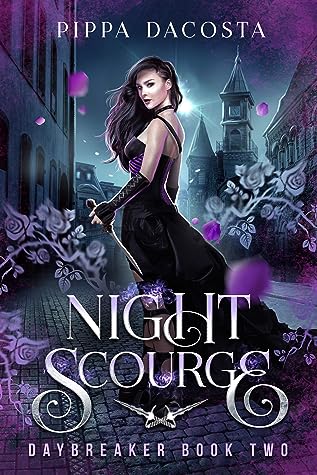 Pippa DaCosta is like the ultimate brain candy author. When I pick up one of her books, I know it's going to be cheesy goodness in a fun, escapist way-- basically, whatever the literary equivalent of eating chili cheese fries is. I loved the first book in this series, TWILIGHT SEEKER, so much that I immediately launched into the sequel, even though I'm usually the type of person who puts off reading sequels for so long that by the time I finally get around to it I forget what happens.

The heroine of this book, Lynher, runs a "station" which is kind of like the inn in Ilona Andrews's Sweep series. It's a waystation between worlds, so fae, demons, and vampires all stay there, and despite the fact that they all hate each other, the station is supposed to be neutral ground where there is a tenuous truce. Basically it's kind of like how Portugal was in WWII, with all the spies meeting up in Lisbon. Truly neutral territory where scheming and plotting comes afoot. Such it is with the station and its crew of supes.

The last book dropped some pretty harsh and interesting secrets that indicated that a lot of what Lynher thought about herself, her brother, her friends, and her guardian might be wrong. And then it ends with a truly bizarre cliffhanger that made me go "whaaaaat." After reading this book, I'm still a little confused... and maybe not in a good way. I feel like I missed out on a book, even though I totally did not.

NIGHT SCOURGE was, to me, not quite as good as TWILIGHT SEEKER. I really liked Jack from the first book and thought he was the love interest but in this book he's mostly absent and we're stuck with the incubus, Rafe, who has a Rhysand dynamic with the heroine. If you're a fan of the ACOTAR series by Sarah J. Maas, I think you'll be into this book because his character is super similar (he even has wings-- and the heroine thinks they're super hot), but I didn't really like him that much. I also felt like Lynher felt much more toned down, character-wise. In the first book, she was a consummate bad-ass who weighed her decisions carefully and was such an impressive tower of strength. Here, it's all about how hot Rafe is and second-guessing herself and making hasty, foolish decisions.

I tend to feel this way a lot about second books-- I think a lot of people do. It can be hard to write a series and have the second book follow up on all of the foundational action and still be as gripping. And to be clear, NIGHT SCOURGE wasn't bad-- I did like it-- but I ended up skimming a lot of the parts with Rafe, and I'm not sure a lot of the heroine's decisions really made sense. I'm excited for the third book but I really hope it pulls some of these threads together and that Lynher finds her inner bad-ass.