The Last Negroes at Harvard: The Class of 1963 and the 18 Young Men Who Changed Harvard Forever by Ken Garrett 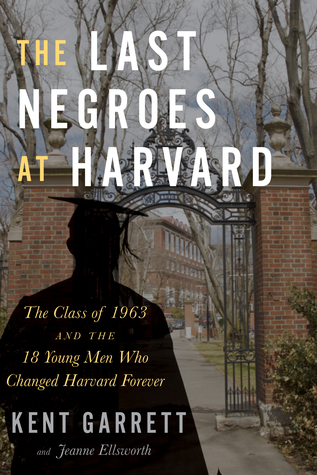 This book is part-memoir, part-journalism, and is about the author's experience going to Harvard as a black man in the late 1950s/early 1960s. In his freshman year, Harvard had included eighteen black men as students at a time when historically, at that point, maybe only one or two were admitted per year. United by their being perceived as "other" by the rest of the student body, even though only some of them identified as African American (one was, I believe, Afro-Cuban and the other was from Barbados), they ended up socializing frequently because of their skin color and the way it could sometimes separate them from other students.

I really enjoyed this book a lot. On the one hand, it was cool to see what Harvard was like in the 1950s, and hear about the student life and the history of the school. On the other hand, it was even more interesting to read about it from the perspective of a man who is observing this wealth of privilege from a different perspective and talking about how he was affected by the lingering effects of segregation, blatant racism, colorism, privilege, and the burgeoning Civil Rights Era, which kick-started many important dialogues about privilege and equality, not just on a social level, but at the enforceable government level, too.

Garrett ends the book with a "where are they now?" section called the gallery, where he interviews his fellow alumni who are still alive, and offers touching reflections on those who are not. Some of them grew up to become professors and one was a musician-- and all of them seemed very grateful to Harvard for affording them opportunities they might not have had otherwise. I loved the guy who bought a Harvard Grad frame for his license after he was pulled over by one too many cops. Choice.

At times, I feel like this book is hard to wade through because it tries to tackle so many subjects at once, but I did enjoy it, even if it could be dry at times. I think anyone wanting to learn more about the history of university education, black history, or the intersectionality of privilege would really enjoy this book a lot.