Promise of Darkness by Bec McMaster 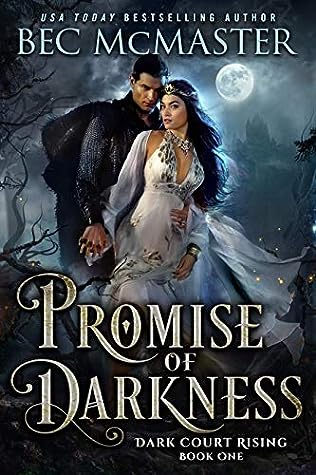 Some people are saying that this is just like SJM's faerie series, but those people are wrong because SJM's writing sucks and this book is the opposite of suck. This book was win. Don't get me wrong, it's romantic fantasy so you're not going to get anything like Tolkien (although I think Tolkien's boring, so that might actually be a good thing); instead, PROMISE OF DARKNESS is a fantasy romance with good writing, fast-paced action, and an intense romance with a lovable but slightly dangerous alpha male that's perfect for fans of Ilona Andrews or Jeaniene Frost.

The beginning of this book reminded me of THE CRUEL PRINCE so hard. Iskvien is the unfavored sister who gets to sit and watch while her mother blatantly practices favoritism with her sister Andraste. This reaches a cruel and incredibly unjust fever pitch when her mother casually trades her as a good faith hostage to the deadly-evil and deadly-hot Prince of Evernight for a couple months without so much as a by-your-leave.

Once at Thiago's court, Iskvien is immediately hit with a case of the insta-lusts, but she at least has the brains to know that she probably shouldn't and sort-of-but-not-really fights the attraction while I sat there with wine in hand and laughed gleefully. Honestly, it shouldn't have worked but it did and part of that is the way that the characters were written. Iskvien can be dumb, sure, but she's also a lot younger than most of the fae in the court, who have been alive for hundreds of years and talk about all the big wars and key players the way humans talk about actors in their favorite movies. It's so much larger-than-life than she's really prepared for, so I felt like her naivete and feelings of being like a fish out of water were totally on point. For what she is, I actually felt like she was a fairly strong female protagonist with some great kick-butt moments.

Thiago was also a great hero. I loved the way he loved the heroine. There's a depth to their relationship that I can't really get into because spoilers, but honestly, by the end of the story I was all weepy-- partially with feelings, but also partially with rage because I NEED THE SEQUEL IN HAND ASAP. There was so much more darkness and court intrigue than I was expecting in this book, and I honestly think that if you enjoy Frost, Andrews, or Holly Black's work, you will really enjoy this one, as it's got all the best parts of romance with all the best parts of fantasy. The court intrigue and fight scenes and fantasy sequences were so well done and there was just enough smut and sexual tension to make me keep flipping pages like a Vegas card counter.

I was kind of shocked that this is the same author who penned KISS OF STEEL, a steampunk vampire story that I thought had promise but didn't really pan out. This just goes to show that authors can grow a lot over just a few years and you shouldn't necessarily write one off because of a single book that didn't really jibe with you. I can't wait for CROWN OF DARKNESS to come out.