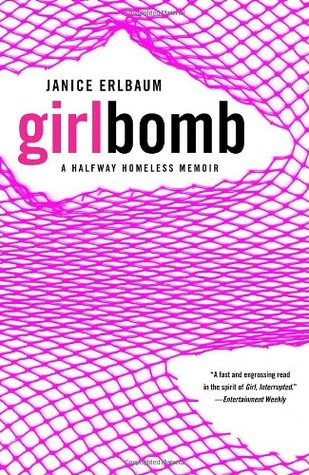 I'm writing this while pretty buzzed since I just got back from wine-tasting, so if you see any typos or odd turns of phrase, that's why. I'm the type of person who thinks that they're more eloquent when they're intoxicated, and who starts throwing out fancy turns of phrase ad libitum to hide the drunk. So if I begin to sound like I'm channeling Dickens, if Dickens was peppered with expletives, I'm fairly fucking hammered, if you pardon my français.

I'm honestly surprised GIRLBOMB has such low ratings, but a lot of the negative reviews seem to be coming from the pearl-clutchers who are like, "Gasp, sex and drugs in a young adult memoir?? Won't somebody please think of the children!" It's true that GIRLBOMB has sex and drugs in it, but that's pretty expected from someone who is coming from an abusive home and seems to have a litany of undiagnosed psychiatric disorders and who might be using "recreational" drugs in a subconscious attempt to self-medicate. Also, this took place during the late 80s, when drugs were basically par for the course. #cocaine #heroine #yolo

The other complaint I saw was a bit more troubling, which was that Janice Erlbaum was "privileged" and made the memoir unpleasant to read. I wasn't sure what was "privileged" about this book, unless it was something Erlbaum acknowledged herself - that she was a white girl who wasn't pregnant and wasn't sexually abused, living in a group home surrounded by women of color who did face these issues. I guess if your definition of "privileged" is "circumstances that aren't as bad as the worst case scenario" then yeah, Erlbaum was privileged. But I don't think we should be gate-keeping who gets to call themselves a victim, especially if they do come from an abusive lower-income household. You shouldn't have to be the worst-case scenario to reach out for help if you need it, which Erlbaum did.

Janice Erlbaum's memoir reminded me a lot of GIRL, INTERRUPTED, in that it shows how 1) institutional care can actually be brutal and cruel, to the point where it almost harms as much as it hurts, 2) teens need structure and neglect can be as harmful as abuse, 3) people love to gate-keep who gets to be a victim and who doesn't, and "privilege" doesn't always mean what people think it does, and 4) we as a society are much less forgiving towards women who act out than men. It's true that Erlbaum's childhoold and teen years were pretty wild, but it seems like they were a good learning experience for her, and were the catalyst for a lot of painful realizations about what it means to be an adult. I don't think that we should paint all young adult-targeted books containing sex and drugs as filth, since for many youths, those things are an integral part of their coming of age.

GIRLBOMB was a pretty good book and I think a lot of teens will be fascinated by it. It's pretty clear that Erlbaum is not an ideal role model - and to be honest, I didn't even get the impression that she saw herself that way - but despite some of her regrets, I didn't get the impression that she rued the learning experience she got from making her numerous mistakes. It must have been frustrating having a mother who was so inaccessible during a time when she needed parental guidance, so I'm seriously side-eying the (probably) parents who are crying about Janice not "respecting" her mom. That ship sailed the third time she took her abusive husband back, imho. Parents need to think about what's best for their kids, and it seems like the mom really failed Janice, based on this narrative. Their relationship got better once they were closer to being equals, and honestly that sort of dynamic is typical of people who were never ready or even willing to be parents in the first place. With books like these, it's really important to take everything with a grain of salt and realize that humanity rarely does things "by the books" and sometimes you have to make the best out of an unideal situation.