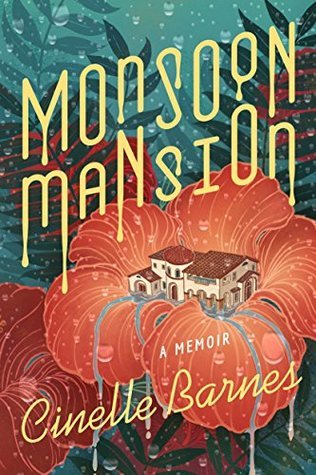 When asked to describe my literary tastes, the quote from Lydia in Beetlejuice comes to mind: "I myself am strange and unusual." I'm drawn to weird books, the more outlandish the concept or the more mixed the reviews, the better. Oh, I like NYT best-sellers as much as anyone, because I'm a curious cat at heart, but what really gets that rush of anticipation through my veins is the idea of reading something super strange and freaky. #FFOMO (freaky fear of missing out). And memoirs are perfect for #FFOMO

MONSOON MANSION crossed by radar when the Kindle store was having a deal in which you could buy certain books for "credits" to get free books with purchase. I almost bought it but the price tag was too expensive, so I waited until it went on sale. The premise of abuse as explored in memoirs is sadly not a rare concept, and I think that uniform experience is another tick in the #MeToo movement's favor tbh, but MONSOON MEMOIR stood out among that backdrop of (mostly white) tragedy because it was set in the Philippines and being told by a woman of color.

Cinelle Barnes grew up in a large and opulent mansion. Her childhood was a whirl of color and glamor reminiscent of a Baz Lurhmann film, with champagne toasts and dinner parties and glittering chandeliers. Then, one day, a monsoon hits, causing destruction to both the house and their family fortunes. Her father leaves to pursue other opportunities that might make money, and in his absence her mother decides to take up with her (white) lover, a crazy and abusive con artist with political aspirations who thinks nothing of selling counterfeit title deeds or filling the house with prostitutes.

I think when I was picking this up, I was expecting something like CHANEL BONFIRE or THE GLASS CASTLE. Something that was sort of romantic, even as you found yourself thinking, "Oh my God, who does that with their kids?" (*cue "Won't Somebody Think of the Children?" refrain from Helen Lovejoy*) MONSOON MANSION was significantly darker than that. Norman, her mother's abusive boyfriend, is a monster. He makes her do chores for him to get meals. He stops paying the water bills, telling her now she gets to see what other people in her country live like, so she has to get her own water from a well and ends up getting food poisoning after ingesting hundreds of mosquito larvae (and probably bacteria as well) from the untreated water. As a present, her mother gave her a baby chick she raised to a chicken, and to punish her after losing one of his own cockfights, Norman kills her pet bird and serves it up at dinner, much to her horror. He also turns their house into a brothel and some of his creepy friends even come up to Cinelle's room and molest her. Ugh.

It feels wrong to say that I enjoyed this book because in part it was so awful, but also it had some technical errors that kept it from being a truly enjoyable book for me. First, I do want to say that I appreciate the raw honesty in the author's writing and the vividness of her recollection. I think tragedy can brand you, and if you can take that intense pain and turn it into something therapeutic, that's wonderful. Memoirs can be good catharsis - provided that they don't force you to relive your tragedies in an unhealthy way - and even provide solace to others going through similar situations. I've always believed writing to be powerfully therapeutic for people who have anger or sorrow that they don't feel comfortable expressing in other ways, and I suspect that Cinelle Barnes feels the same.

The problem is that the beginning is a slog. It's necessary to provide contrast to the last half of the book, when her family loses their fortune, but the long laundry lists of their wealth and privilege got a little dull after a while and caused me to shelve this book for a bit before gearing myself back up for round two. Her writing style is very flowery and dreamy, and while this usually works, sometimes it doesn't. She tends to use multiple metaphors, when one would serve far more concisely.

Also, from a purely technical aspect, there's something off with the page count of this book. It's supposed to be only about 241 pages but is much longer than that, because when I got to page 241 in my Kindle book, I was only about 85% done according to the progress bar. I continued reading, and the pages all said 241, even as the progress bar continued to move. Methinks someone screwed up.

Overall, MONSOON MANSION is a pretty good book. I think if you are into memoirs written by people like Jeannette Walls, Elizabegth Gilbert, or Mary Karr, you'll probably enjoy MONSOON MANSION. It wasn't quite to my tastes but I think memoir enthusiasts will enjoy it more than I did.