Everything's Trash, But It's Okay by Phoebe Robinson 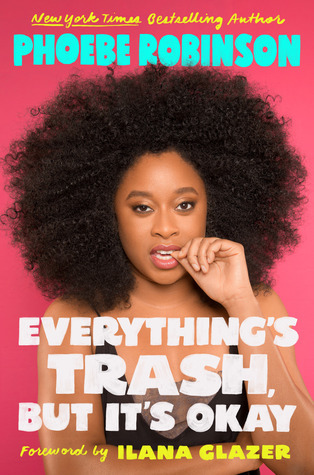 I mean, there was no way I wasn't going to read this. Even if Phoebe Robinson of YOU CAN'T TOUCH MY HAIR fame hadn't wrote it, I would have picked it up anyway because it has 'trash' in the title. What kind of Trash Queen would I be if I didn't read a book that professes the solemn doctrine I hold so dear: that everything is garbage, and it's up to you to embrace the dumpster life because #traaaay (as in, trashy-slay). OF COURSE.

EVERYTHING'S TRASH is a much different book from YOU CAN'T TOUCH MY HAIR. I feel like YOU CAN'T TOUCH was a series of dialogues about what it means to be a black woman that unpacked a lot of the things that make up the identity, the heritage, and the current joys and problems that are associated with being black. EVERYTHING'S TRASH, on the other hand, adopts a broader focus while also refusing to bow down to white feminism or stray away from things that people might find uncomfortable or unsavory (e.g. white people can be trash).

I enjoyed this book a lot. Her sense of humor actually reminds me a lot of Tiffany Haddish's in her memoir, THE LAST BLACK UNICORN, but I feel like Robinson has a better idea of where the line is and knows when to stop. (Haddish, on the other hand, well. If we've read her book, we're familiar with the Roscoe chapter and we know how ~cringe~ it is.) I loved how she made up funny words and phrases that actually made a lot of sense in context, and I loved the topics she wrote on, which covered everything from sizeism to toxic masculinity to black lives matter to white feminism (and the problems associated with that) to sexism to racism.

There was a lot, and I feel like her ideas are going to make a lot of people angry (ha). I obviously was not, because I agreed with mostly everything she said, even (maybe especially?) about what she said about white people closing their eyes and covering their ears and going lalalalala every time someone tries to bring up race. It is uncomfortable to talk about, but that's all the more reason we should have these conversations. Talking about race is not inherently racist and saying that you don't see color is just as problematic as focusing on it too much. These are simple truths, and yet so many people can't be bothered to hear them. She has similar refrains when it comes to sexism and philosophy, as well. Her brief mention of what it means to be agnostic and mortality salience particularly struck me because it was a little too r e a l. I wasn't really prepared for how comparatively dark this book would feel while juxtaposed against the first, but once I got used to it, I was like, "Okay, yeah."

EVERYTHING'S TRASH, BUT IT'S OKAY is a very different book from YOU CAN'T TOUCH MY HAIR, but still manages to keep the same tone that made me appreciate the first so much. Honestly, I wish we made bigots take "good person" classes the way people who suck at driving have to take driver's ed, because this is one of the books I'd hand them to read as one of their assignments.