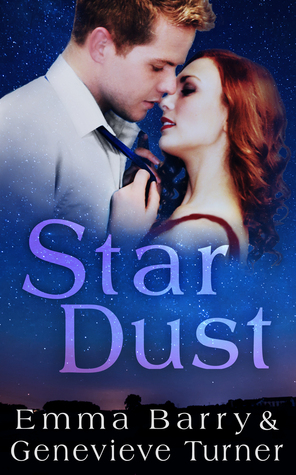 I got this for free in a bundle of feminist-friendly romances a couple years ago that the authors had given out as ARCs to readers. I'm only just now getting around to it and I'm sorry about that! (But better late than never, right?) After reading STAR DUST, I'm thinking to myself that maybe I don't read enough cute romances because this... was really, really cute. Cute with substance.

STAR DUST is set in the 1960s, during the days of the cold war and the space race. Anne-Marie Smith is newly divorced, an oddity in these times, and is dealing with a lot of the social stigma her new and unusual marital status brings. Kit Campbell is an astronaut and a playboy. They're new neighbors in their suburban development, and the attraction between them is as instant as it is unwanted. Kit is reluctant to change his ways and knows that anyone who dates him will be in the limelight. Anne-Marie has two kids to think of, and is still trying to find her identity as an individual - not as a partner.

I wasn't expecting much from STAR DUST but it proceeded to shatter each and every one of my expectations or lack thereof. Obviously in a period piece, it's important to get the setting right, but while reading this, I felt like I was smack-dab in the middle of the 1960s. It gave me Stepford vibes. I also love seeing the hero and the heroine at work in romances, because I think it's important to show the characters as individuals who exist outside of being in a couple, and Emma Barry and Genevieve Turner did that. There's scenes of Kit flying into space, of him training for the process, and even scenes of him dealing (with some ambivalence) with the fame and hero worship of his job. Likewise, we also get to see Anne-Marie as a mom who deals with her kids' hurts, bakes and cooks meals, and who also works as a travel agent and finds joy in being able to achieve success outside of the typical housewife role. Her satisfaction was really heart-warming, as is her later heart-to-heart with her boss, who originally judges Anne-Marie unfairly for divorcing her cheating husband.

That's another thing I liked about this book. It brought up a lot of deep and important (and sometimes unsavory) issues that period romances like these tend to brush under the carpet. Writing romances set in the 1960s without sexism and changing gender norms is like writing writing a romance set in the 1860s without slavery. Just because something makes you uncomfortable, that doesn't mean you shouldn't pretend it exists. Many of the feelings Anne-Marie feels about her divorce and the judgments about who she is as a woman from people who don't even know her are still relevant today, and I thought that the authors handled the subject matter extremely well. The emphasis on female friendships and female relationships in this book is also quite lovely.

The romance itself is also great. Kit is hot and the sex scenes between him and Anne-Marie are extremely steamy. Normally playboy characters get on my nerves because they're written like misogynistic jerks but Kit is actually very charming. It's endearing how Anne-Marie forces him to go off-script and makes him second-guess some of the choices he's made in his life and how they are impacting his happiness. I didn't really understand at first why Anne-Marie wanted an affair with him and not a relationship at first, but I guess I get it. Her divorced-status makes her a social pariah and excuses her from the rules that "good girls" are expected to follow, so I guess maybe she was choosing selfish indulgence and mindless pleasure over something more concrete both because it was something she felt denied before, and because it wouldn't have any ties that could become constraints later. After thinking it over, I felt more comfortable with the idea and how it fit in with her characterization, because at first it felt very strange. The resultant sex scenes were totally worth it, though!

If you're tired of sexist romances, I really think STAR DUST will be a breath of fresh air. I really enjoyed how light and cute it was, while still hitting upon all of these relevant issues. In that regard, it reminded me a lot of Courtney Milan's and Beverly Jenkins's works. They're the only other authors who write het romance who manage to touch upon these issues in a meaningful and succinct way without sounding either preachy or ignorant, and I love them for it. Looks like Emma Barry might be joining their ranks in my book. I'm rather desperate to get my hands on A MIDNIGHT CLEAR now, as it's Parsons's book (Kit's boss), and I'm a sucker for the gruff and grumpy tsundere types. :)