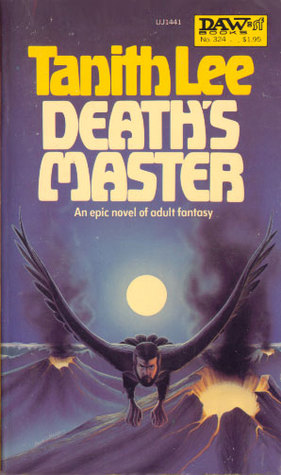 I'm a huge fan of vintage novels and fantasy is no exception. The trick is to find fantasy novels that are vintage that weren't penned by misogynistic dude-bros. Luckily, I have ladies such as Tanith Lee, Mercedes Lackey, and Andre Norton to choose from. Where would us female sci-fantasy readers be without that speculative cadre?

I recently read the first book in the Tales of the Flat Earth series, NIGHT'S MASTER, with my friend Elena, and we had such a good time that we decided to read the companion book, DEATH'S MASTER, together. The Flat Earth books are set in a fantasy world with a Greek-like pantheon. The origin stories meld into each other, and the whimsical (and yet sinister) magic system kind of reminded me of the Oz books, especially because of the many cruel ironies of the plot (Tanith Lee is a firm believer in Chekhov's Gun).

The first book was about the demon god, Azhrarn, who makes cruelty and mischief his domain. This book is about Uhlume, the god of death, and his stoic moodiness is clearly modeled after Hades, right down to the cruelty of his utter inevitability and the justness of his punishments. Azhrarn is a typical cocky immortal, calling to mind such elemental beings as Jareth, from Labyrinth, or Loki, from The Avengers. By contrast, Uhlume is much tamer and doesn't really inspire the same level of interest. He was just there, looming.

I feel like the plot of the story is cast in this mold, because it doesn't have the spiciness of the first book. Everything moved so quickly in NIGHT'S MASTER, one story leading seamlessly into the next before coming full circle. It was so much fun to see all the hell Azhrarn stirred up. In this book, there is still that sense of melding between stories, but it felt much more disconnected. I also didn't enjoy all of the stories equally, although I liked the part about the Golden Garden with Kassafeh, the opening sequence with Narasen, and the ending when spurned Zhirek got his revenge on Simmu.

One thing I will say about Tanith Lee is that her characters were lightyears ahead of their time. She writes convincing antiheroines - Lylas, Narasen, Kassafeh - who do terrible, cruel, selfish, cowardly things, and yet are still whole individuals with agency who manage to obtain the sympathy of the reader. This is a privilege normally reserved for male characters, and it was refreshing to read a book where women were "allowed" to be bad. She also has many LGBT+ characters, and this book is particularly special because one of the characters is gender fluid, able to shift between man and woman because of their magical dual nature, and yet they constantly embody the traits of both.

I still enjoyed this book, even though it didn't grab me the way the first one did. Tanith Lee is a truly exceptional author and I'm really glad Elena agreed to read this one with me because my omnibus edition of the three books is intimidatingly long, and I probably would have procrastinated on reading it otherwise. Hopefully I can convince her to read DELUSION'S MASTER, as well...