A Rose at Midnight by Anne Stuart 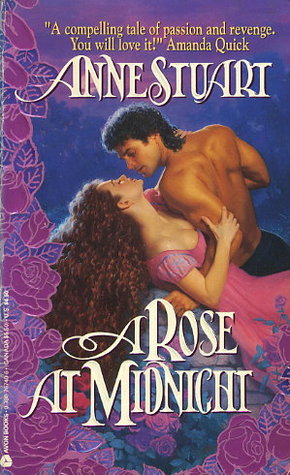 💙 I read this for the Unapologetic Romance Readers' New Years 2018 Reading Challenge, for the category of: Wildcard - Whatever Romance You Want! For more info on this challenge, click here. 💙

I've had A ROSE AT MIDNIGHT on my to-read list for years and when my friend Heather told me it was on sale on Amazon for 99-cents, I shrieked. There are two kinds of romances that I love, you see: retro romances and romances where the villain gets the girl. This book is both those things. Instant five stars... or so I thought.

The premise of this book is great. Nicholas is a jaded and cruel libertine who has basically given up on life. He gambles, gets into duels, sleeps around, and doesn't care about anyone but himself. His greatest act of cruelty was allowing his French godfather to die in the French Revolution by refusing to marry his young daughter, thereby leaving him free to manage his own affairs and escape.

He tries to forget about that last one because it stirs up something a little too close to guilt in his blackened husk of a soul. But there is one person who hasn't forgotten and that's Ghislaine. Ghislaine is the daughter of Nicholas's godfather, and when he died both she and her young brother were forced to survive on the streets. Ghislaine went through fifty different kinds of hell to survive, and had to sacrifice her honor, her innocence, and her soul. She's been planning revenge this whole time.

She contrives to become Nicholas's cook through his young cousin, Ellen. Once installed in his household, she tries to poison him. Her attempt fails, and Nicholas decides it would be sporting to kidnap Ghislaine away to somewhere remote where he can punish her at his leisure.

I feel like A ROSE AT MIDNIGHT had a much darker book at its core. Ghislaine's background story is certainly one of the darker stories I've encountered in a book that was published after the 80s, calling to mind some of those tawdry tales penned by Jennifer Wilde, specifically LOVE'S TENDER FURY. The overall execution left me wanting, however. I feel like Nicholas talked a big game as a villain but that's mostly what it was - talk. He keeps talking about perverse pleasures, but for the first 70% of the book all he really does is kiss her. IT TAKES FOREVER FOR ANYTHING TO HAPPEN. And when it does, she wants it/doesn't want it, traitorous bodies, etc. Which I know annoys some people and I get that (but it doesn't bother me - because obviously, bodice ripper queen here, hello), and I can deal with some non-con if it fits the story and isn't glossed over.

Here, I felt like it was glossed over and the line between Ghislaine wanting to kill Nicholas and Ghislaine wanting to do the naughty with Nicholas ten times over wasn't really clear. When did she go from point A to point B? Particularly since he doesn't really soften towards her until the very end of the book when he decides to go all Rambo for the sake of her revenge (read: bloody murder). I guess I wanted a more ruthless and unapologetic hero who put his money (read: his peen) where his mouth was (read: whoops, that was pretty naughty) and then had the mother of all grovels in the last act, because I wasn't really convinced of his True Love for Ghislaine or why he would feel that way.

I also was not keen on the secondary romance. Ellen and Tony (one of Nicholas's friends) end up taking up a significant part of the page count and I wasn't really interested in him at all, since he is so smarmy. I found myself skimming when their scenes came up. They aren't even really mentioned in the blurb so that feels deceptive. I'll take my dark romance, thanks! Hold the fluff.

Despite these qualms, I did like the story and it was dark enough to capture my attention and keep me reading. If Ghislaine had kept her fire and Nicholas had been darker and more villainous, I think I would have enjoyed A ROSE AT MIDNIGHT more than I did. It certainly isn't as wishy-washy as other 90s bodice rippers I read, and I really appreciated the atmosphere and the effort that went into building Ghislaine's backstory. This definitely is not the worst thing Anne Stuart has ever written.

TO LOVE A DARK LORD, here I come!

P.S. Was it me, or did that epilogue feel totally tacked-on? What a lame, half-hearted ending.