The Cutting Room by Louise Welsh 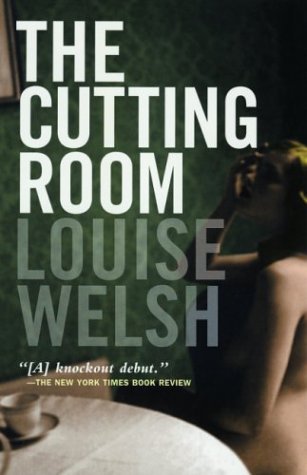 A man not satisfied with looking up women's skirts, he wanted to get closer, ever closer, until he took the object of his desire apart, breaking it in an effort to discover how it worked (228).

Wow, it's the mystery-thriller I didn't know I desperately wanted to read. I actually got this author confused with Minette Walters when I saw it at a thrift store, because the covers and names are a little similar and both of them write dark mystery novels. Minette Walters this author is not, but she's still a damn good story-writer.

THE CUTTING ROOM is about an auctioneer named Rilke, a man of gray morals who solicits sex by night and often frequents gay bars, when he's not dabbling in objects of dubious provenance. Rilke is a great character because he fits right into the noir novels of the 50s, and yet his character is much more modern (and gay!), while also slotting neatly into the tone and the mood of his gumshoe predecessors.

His latest client is a woman whose brother has died. She wants Rilke to clean out their house in under a week but the pay is so good that the nigh-impossible challenge becomes an impossible-to-resist lure. The reason for her haste soon becomes clear when Rilke works his way up to her brother's office and finds all kinds of books, photographs, and art devoted to morbidly sadistic fetishes that cross into psychotic: an obsession not just for causing pain, but also to mortally wound... even murder. Pretty soon, Rilke is asking himself, "Yes, I know this man is f*cked up - but would he kill?"

I had a lot of people ask me about this book when they saw me reading it because they were intrigued by the cover and title and I told them that it was a lot like THE GIRL WITH THE DRAGON TATTOO. The mystery kept me turning the pages, but the journey getting there was fun because of the way it was written and the fleshed-out characters with their intricate complexities. I was desperate to find out the truth about the man who owned the pictures, even as I wondered whether Rilke's desire to make a buck would end up causing obstruction. It was a brilliant moral tug-of-war.

I also liked that as a gay character, Rilke got a decent amount of sex. Good sex, too.