Ponyville Confidential: The History and Culture of My Little Pony, 1981-2016 by Sherilyn Connelly 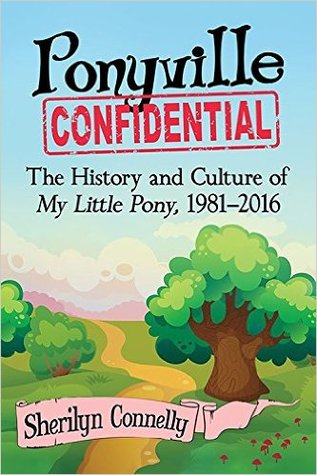 I am a true 90s kid, and let me tell you, that as a girl who loved girly things, it was a great time to be alive. I watched Sailor Moon, Sky Dancers, Princess Gwenevere and the Jewel Riders, Care Bears, and of course, My Little Pony Tales. I was particularly obsessed with MLP and as a little girl, I probably had about 50 of the pony dolls, including some from the apparently much-loathed G2 release (am I the only one who actually liked the taller G2 ponies?). When I saw that a book about the history of MLP was on Netgalley, I was super excited and signed up for it immediately, because, I mean, obviously. MY CHILDHOOD!

First, I have to say that the subtitle of this book is a bit misleading, as the majority of this book focuses on the author's own self-admitted favorite part of the franchise: specifically, Friendship Is Magic and Equestria Girls. I personally felt like she dumped on the poor G1 ponies/franchise a lot as being cheesy and inferior to her own preferred incarnation of the series, and it sounded to me like she hadn't actually watched many (if any) of the My Little Pony Tales episodes and maybe just the movie? I've seen the movie, and I will agree that the movie itself was not great, but the TV episodes actually hold up pretty well. I recently rewatched Bright Lights, which was always my favorite episode of the series (it was a two parter) - and man, it's just as creepy now!

I had mixed feelings about the focus on Friendship Is Magic. I've watched a couple episodes and I've read several of the graphic novels. I loved the graphic novels and thought the writing was smart and witty for the most part (there was only one comic out of about five that I didn't like). I also think the TV show has good writing, and in many ways it reminds me of the TV show Arthur: both create complicated characters with human-like motivations that kids can relate to, where characters are allowed to act selfishly or occasionally do bad things without actually being branded "bad" people (or ponies or aardvarks, w/e). It's also become such an integral part of pop culture in the way that the first 3 generations didn't, with wide cross-over appeal (see bronies). So, I get it. I actually own a very small collection of G4 ponies. They're really cute, and one of the better "reboot" efforts I've seen.

The biggest setback of this book is her inability to separate herself from her obvious favoritism of Friendship Is Magic and, specifically, Rarity. If you don't like Rarity, buckle up, because this author is only going to mention how Rarity is the best pony 2342323 times. She also seems to have an ill-concealed disdain for people who identify as Bronies and Pegasisters, and makes sure to say that she identifies as neither. In the chapter of the book that focuses on Bronies, she portrays them all as toxic, backwards, misogynistic people, and in particular spends a lot of time about the Derpy controversy. There was also some really weird discourse about the Equestria Girls dolls, and how they are TOTALLY different from the Monster High Girls dolls (and no, they really aren't all that different). She tries to argue that they look friendlier and their clothes aren't as slutty or something like that. I was also side-eying her for saying that the Equestria Girls aren't super skinny because HAVE YOU SEEN THOSE EPISODES? Their arms look like little noodles. And I have absolutely zero hate for skinny women, but if you are going to talk about body positivity, OF COURSE I'm going to look at you funny for championing a TV series about a bunch of Betty Spaghetti lookalikes.

The best argument in this story for me is that girls' TV shows should not be branded as stupid solely because they are TV shows for girls. A lot of the TV shows I watched as a kid still hold up, and have surprisingly good writing - especially Care Bears, Sailor Moon, and My Little Pony. I think a good comparison - and one the author mentions in the book - is the hate that women got for reading TWILIGHT just because it was something that appealed to women and didn't even bother attempting to cater towards men (and, infuriatingly for some I'm sure, succeeded wildly despite their lack of patronage). In a way, kids' TV shows (specifically girls' TV shows) and women's romance novels face many of the same problems: people are determined to deligitimize them simply because of who the target audience is, and men and boys who like these things are mocked and bullied. It really is a perfect example of where gender equality has failed right under our very noses. If both genders were truly equal, there would be no sense of shame for liking something branded for women and girls.

P.S. I'm trying to remember who my favorite MLPs were from the original. I'm pretty sure I liked Lickety-Split and Wind Whistler. Out of the new ones, Twilight Sparkle and Fluttershy are my faves.