The Queen's Dollmaker by Christine Trent 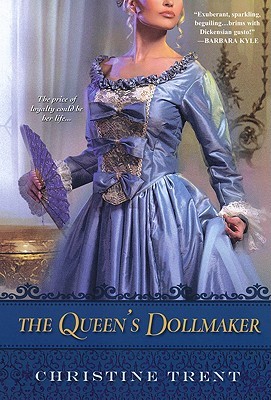 When I was in college, I went through this phase of ritualistically devouring fluffy, chick-lit style historical fiction a la Philippa Gregory. It really didn't matter if they were good, bad, or downright awful - I read them all, and I read them with glee.

THE QUEEN'S DOLLMAKER felt like a throwback to that time. Without demeaning this book, THE QUEEN'S DOLLMAKER is a work of fiction that is very much intended with women in mind as the audience. You can tell from the way its packaged - that gorgeous dress, the elaborate cover, the fact that the fellow author blurb that they decided to showcase on the cover says, "Exuberant, sparkling, beguiling!"

The story itself also feels very fluffy. It's about a girl named Claudette who loses her family in a fire and ends up going to England, along with a group of other women. To their collective horror, they are bound as prostitutes. Only a suspicion of sketchy documents and an unwillingness to sign whatever is presented to them saves Claudette, as well as Elizabeth and Beatrice and her young daughter Marguerite, from their fates.

Beatrice and Claudette end up working as servants for this hilariously caricatured social climber named Maude Ashby. It's rough living, but when a doll she's made for Marguerite is spotted by one of the male servants, he comes up with a brilliant money-making scheme to line their pockets with extra cash. It takes off, and soon Claudette is making more and more dolls, flush with coin, and filled with a new sense of self-confidence. It doesn't even matter when the jealousy of the servants reaches a fever pitch and results in her getting fired: Maude Ashby can take her aspirations and shove them!

At one point, Claudette becomes so famous that her talents reaches the ears of Marie Antoinette herself, who requests commissioned dolls for herself and her friends. This is when the book gets a little weird, because when she goes to France, she meets her childhood friend, Jean-Phillipe, and the meeting awakens some awkward feelings in her... which is annoying, because back home she has this great guy named William Greycliffe, who is perfectly willing to marry down because he loves her so much and finds her (admittedly annoying) personality charming. He isn't thrilled when Claudette goes to France, and the wishy-washy love triangle that sort-of-but-not-really ensues feels forced.

Where the book really jumped the shark for me, though, is when Claudette receives a letter - mid French Revolution, mind - from the "queen," requesting her presence in this time of terror, with the escort of Jean-Phillipe. Claudette goes off without a thought... and let's just say that this ends very badly for her. I felt bad about what happened - but at the same time, man, how stupid can you be? French Revolution, aside, why would you ditch your husband yet again to be alone with an impassioned, crazy guy who basically said he would do anything to have you? Not smart.

The last one hundred pages or so achieve bodice-ripper levels of craziness, with deception, imprisonment, rape attempts, people being rended limb from limb by screaming mobs only to have their organs paraded tauntingly before the windows of the nobility, descriptions of the guillotine that are almost excessively colorful, and a general feeling of rage and hysteria as the old is quite forcibly shoved aside to make way for the new. Imagine this - and now, imagine alternating chapters that set scenes of happy domestic bliss in England between Claudette and William. Oh no, someone has put the Princess of Lamballe's head on a pike... but look, somebody's getting married! Robespierre is screaming his way to the guillotine with a gag in his mouth... but oh, that dratted Mrs. Ashby just got hoisted by her own petard, L-O-L. It was very jarring, tone-wise, and had me blinking several times.

Overall, though, I really enjoyed this story. I love these saga-like tales that start off with the heroine as a child or adolescent and then follow her adventures over the years until she reaches adulthood. I feel like it really lets the reader get to know the character and feel for the character in a way that some of the more straightforward timelines don't. If you don't mind a bit of craziness with your historical fiction and aren't totally put off by stupid decision-making, you should read this book. It's fun.