The Comic Book Story of Video Games: The Incredible History of the Electronic Gaming Revolution by Jonathan Hennessey 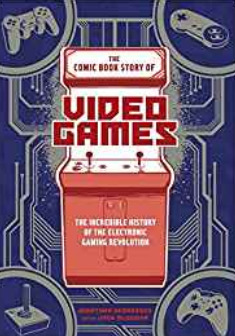 The other day at work, I picked up my trusty bottle of iced black coffee (lightly sweetened, no milk). I took a sip - and immediately, my mouth went whoa, something is wrong here! Did the coffee go rancid? But no, it did not have that nasty "gone-off" taste; it was just bitterer than I was used to. I picked up the bottle and eyed the label: it said UNSWEETENED.

There was nothing wrong with the coffee - it was actually so smooth that drinking it black and unsweetened was perfectly acceptable to me - but I hadn't signed up for black coffee. I hadn't mentally prepared for black coffee because it wasn't what I had asked for or even expecting.

That's kind of how I feel about this book.

THE COMIC BOOK STORY OF VIDEO GAMES caught my eye immediately when I was looking at ARCs I might want to read because of the 80s styled cover and the intriguing title. I'm an ex-gamer with a geeky streak you could right a souped-up Delorean down; there was nothing about that title that did not intrigue me.

Unfortunately, Yzabel was right on the money when she says that, for a while, at least, the focus of this book is not about video games themselves, but the various technological advancements that made the invention of video games possible. Which, okay, is interesting, but not really what I signed up to read about - and it goes on for waaaay too long. The actual video game parts don't really begin until around p. 70 or 80, which leaves a significant portion of the book being not about games. (That was a really awkwardly worded sentence, but bear with me, guys.)

I did enjoy learning about the games. Hennessey discusses most of the major systems, although I was surprised he left out Virtual Boy and the Power Glove. Also, the vintage Tiger handheld electronic LCD games don't even warrant a mention? I had one of those long before I ever had a Gameboy. He does, however, discuss the "arms race" (my phrasing) between Nintendo and Sega, the oversaturation of the game market in the 80s followed by that fatal market crash, the switch from cartridge to disk, and the emergence of Playstation and X-Box following Sega's exit. Oh - and Pokemon GO, ofc.

The art is also fun. Even in the parts that aren't about video games, the artist will have little Easter eggs placed here and there to remind you that, yes, you are reading a book about video games - or at least, you will be, soon. I was pleased to see Banjo Kazooie, the guy from Balloon Fight, and Rayman, as well as a Tapper appearance when one of the panels is set in a bar. Some of the panels will be in 8-bit or 16-bit styles randomly, too, which captures that 80s nostalgia feel.

I just wish more of the book had been about games.