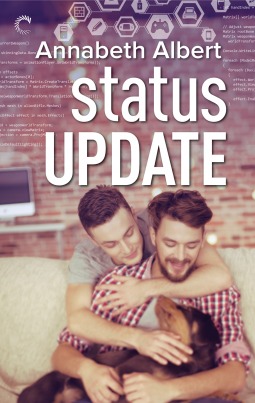 While looking at my books a few months ago, it occurred to me how most of the romance novels I read are about straight, white characters. I've been trying to change that, by incorporating some new and different titles into my usual mix of historicals. This week, I've been focused on M/M titles in particular, and while sussing out my options, I realized I owned four books by Annabeth Albert. Which pairing should I read? The geek/geek, the military/military, or the geek/military? My goodness, it's like a Punnett square of M/M romance. (And that's probably one of the nerdiest comparisons you'll ever hear in one of my reviews, but in honor of the #sciencemarches happening today, that seems appropriate.)

Ultimately, I decided to go with the geek/geek pairing. STATUS UPDATE is about a lumbersexual archeologist professor named Noah from Utah and a game designer named Adrian from LA. They meet by pure happenstance when Adrian and his boyfriend have a fight and he gets ditched at an RV park. Since it's below freezing, Noah grudgingly invites Adrian and his little dog too to stay with him and his dog. They have an instant attraction to each other, but it's hindered by the fact that Noah is pretty religious and has internalized his religion to the point that he hasn't just not come out, he's afraid to because of what it would mean for his family, his career, his religion, and the society in which he lives.

Noah was an intensely complicated character, and reading this book made me sad, because there are a lot of people out there who can't come out because they're afraid of what coworkers, employers, family members, and neighbors would think and that really breaks my heart. I liked his sort of tsundere personality, where he seems gruff and imposing at first, but is actually super compassionate and intelligent and deep if you manage to get below the surface. That's one of my favorite character types. Adrian, on the other hand, annoyed me. He was incredibly self-centered, and I began actively disliking him the moment Noah said he felt uncomfortable with flirting and Adrian did it anyway because he thought it was hilarious to make Noah uncomfortable. No. Noah had to worry about judgment his whole life, and while f*cking with someone for any reason like that isn't very nice, it felt especially wrong to see someone as emotionally fragile as Noah be subject to this treatment.

As they get involved, this becomes a pattern. Adrian constantly pushes Noah beyond his comfort zones. He mocks Noah about his reading habits and his porn, again thinking how amusing it is with how uncomfortable he is about discussing his sexuality. He pushes Noah into having sex with him, especially after he finds out Noah is a virgin. When they do end up together, Adrian starts asking him how he feels about having kids before they're even really officially a couple, and gets hurt feelings when Noah gets uncomfortable and dismisses the topic. When he finds out that Noah doesn't really want to pursue the relationship after that because he's afraid it will complicate his job (he works at a christian school and is about to get tenure), Adrian accuses him of ruining his (Adrian's) Christmas and then tells him (Noah) that he's ruining his (Noah's) life. Wow, what a charmer.

Noah does end up giving up his job at the university because he doesn't want to live in hiding anymore. The scene when he comes out to his family is so touching, probably one of the best parts of the book in my opinion. I loved that the author pointed out that some Christians do practice tolerance, because they don't feel it's up to them to judge, and that many churches are becoming more progressive. It's a really nice idea, since so often we hear about the ones who aren't. I also loved how Noah is validated for being brave for coming out and pursuing another job in greener fields. I just wished it had been with a more likable character, because I really didn't like Adrian.

Overall, STATUS UPDATE falls into the "barely okay" category. I wasn't particularly blown away by the sex scenes (because to me, the characters didn't really have any chemistry, and reading about sex where there's no chemistry does nothing for me at all). The writing was borderline sub-par. You know what it felt like, now that I'm thinking about it, is one of those pulpy Harlequin novels from the 90s with the throwaway characters who don't really have personalities that dive into a whirlwind romance that lasts just shy of the 200 page mark, at which point they have their happily-ever-after. It was just like that, except with two male characters instead of a male and female character. Since it's branded pretty heavily about being a "geek" romance, I was disappointed that the author didn't explore the culture more. Video games and tech culture? Yes, please! But no, there was none of that. Boo hiss. If you love M/M books, you might enjoy this more than I did. It's not badly written and neither of the characters is odious. I'm hoping that the geek/military and military/military ones might be better....