The Raging Hearts by Patricia Hagan 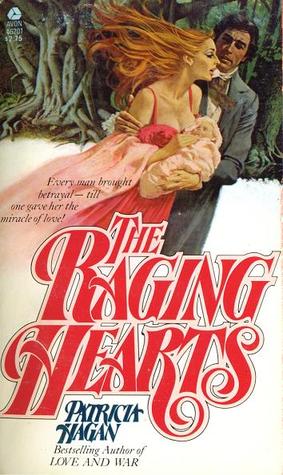 When I started reading LOVE AND WAR, I wasn't sure what I was going to get. Sometimes bodice rippers are epic tales of melodrama doused in history...and sometimes they're just awful. LOVE AND WAR was great - it had history, it had a compelling female protagonist, and it had heroes who were virtually indistinguishable from the villains. My only qualm was that the pacing was uneven, but that's a common issue with 550+ page tomes of that nature.

Despite said qualm, I immediately raced out to buy the sequel, THE RAGING HEARTS, to see what happened to my new favorite romance heroine, Kitty Wright, next. Kitty managed to survive the Civil War and so did her lover, Travis Coltrane. But now Travis wants to finish up all his loose ends and retire to the Bayou, and Kitty doesn't want to do that - she wants to stay on her father's land.

The two have a falling out, and Kitty tries to make her living in the town that not only hates her father but also hates her lover. Things get pretty ugly, fast. The jealous OW is determined to see Kitty humiliated, if not hung. The KKK is gaining momentum - headed by one of the other "love" interests, no less! - and Yankee carpetbaggers are buying up all the Southern land at cheap, cheap prices...and God help those who get in their way.

If you really liked Travis, you might be a little miffed at RAGING HEARTS, because except for the beginning and the end of the book, Travis isn't really in here. And once he does finally drag his ass through the door, he behaves like a total jerk. I wanted to slap him for being such a horrible person. I mean, he was always a horrible person...but this was particularly bad.

THE RAGING HEARTS doesn't have the history or the depth of the first book, but it compensates with drama. I actually thought the middle section - the one with all the scheming and the manipulation - was incredibly well done and for a while, I thought this would be a five star book. TRH gets dinged because Kitty becomes a doormat in Act II (as she always seems to whenever Travis walks in), and she gets especially annoying once she has her baby. Plus, there's Travis and his annoyingness, and I had a lot of trouble buying that HEA at the end. She had to do that to gain your trust again? I said it before, but I'll say it again "what a jerk!" (Also, this book is waaaay repetitive.)

Overall, I enjoyed THE RAGING HEARTS. It was good and it kept me engaged, and didn't suffer from middle book syndrome the way so many books these days do. In some ways, it was even a better book than the first. I think I can safely call myself a fan of Patricia Hagan now. As soon as I finish some of the other books moldering in my to-read pile, I'm going to go out and get book #3. :)