Across a Starlit Sea by Rebecca Brandewyne 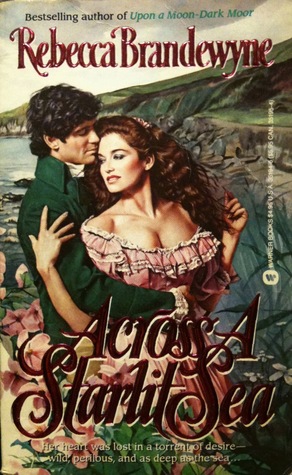 I was a little less excited about reading ACROSS A STARLIT SEA because of how melodramatic and campy its prequel, UPON A MOON-DARK MOOR was. ACROSS takes place with the next generation of the last set of characters. Laura, the narrator of ACROSS, is the daughter of Wellesley, Maggie's half-brother.

The convoluted family tree can be a bit difficult to follow, but by the end of the story (and with the help of the family tree in the beginning of the book), I'm fairly sure that I have everyone straight.

Laura is engaged to her first cousin, Jarrett, Maggie and Draco's eldest son. But she's in love with Nicholas, their younger son. This results in dalliances that happen right under her fiances nose, although Laura starts to have second thoughts when said dalliances start to become, well, rapey. But surely, she thinks, he does it because he loves her so much he just can't control himself? Surely. Oh, boy. You must be new here.

The melodrama in this book is more complicated than the last book because there are more characters to play with, although like UPON A MOON-DARK MOOR, the story spans from the characters' childhoods to their adulthood. The parallels between the story are numerous and interesting - both are narrating as teary old women lamenting the tragedies of their past; both make very cheesy foreshadowing statements like, "If only I had known..." or "perhaps the tragedy could have been averted if I..."; both feature love triangles/quadrangles, with female heroines who flit from one love interest to the other, gravitating to the "wrong" love interest first; both have very flowery descriptions of the moors that are caught in that uncomfortable limbo between poetic and purple.

Nicholas is actually a pretty insidious character, and about what you would expect of a bodice ripper "hero" from the 70s - he's rapey, without morals, and can't keep it in his pants. The only difference is that, in this book, he's kind of a villain. There's also Thorne, who is a villain as well, and homosexual, which is portrayed as being "wrong" in this book (the heroine keeps saying that there's "something wrong" about Thorne she can't put her finger on, and it turns out his sexuality is that thing). A lot of fallen women also feature in this book, and they all meet unpleasant ends, without fail.

I actually liked Jarrett. He was pretty sexy for a bodice ripper hero. (I'm not actually sure that this book qualifies as a bodice ripper, although bodices were ripped...) And unlike the previous book, the hero in this book does not rape the heroine, although at one point she speculates that he would probably try to rape her if she provoked him "lustily". I'm not sure what that means, or what I'm supposed to do with that information, but there you go. Rapeyness quotient aside, Jarrett was a good, solid Byronic hero, and it made the romance in ACROSS A STARLIT SEA much more palatable.

If you read and were put off by the rape in UPON A MOON-DARK MOOR, I think ACROSS A STARLIT SEA will be much easier to swallow. The writing is better, and the story is tighter (even if it is basically a mirror image of book one, right down to a mystery at the mines that's straight out of Scooby Doo). Brandewyne is like a toned-down bodice ripper, or a smutted-up Victoria Holt gothic. If that appeals to you, I say, go for it.