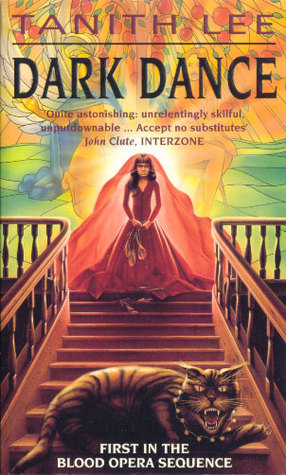 Tanith Lee died on May 24, 2015. I was devastated, not just because she was so talented and I loved her books, but because she's one of the few authors out there I would have loved to have sat down with over cocktails and chatted with about anything - her books were indicative of an unusual, creative mind. I wish I could have found out more about how she saw the world, what books she liked to read, what inspired her, what chilled her (the other is Rosemary Rogers).

I don't always enjoy Tanith Lee's work, but I always appreciate her books. She has a writing style that is completely her own and some people like it, some people don't. I like it. Obviously. I like purple prose, when done well. Especially dramatic, overwrought prose. (Which is probably why I also love Rosemary Rogers and Victoria Holt.) Lee writes a lot of dark fantasy and sci-fi and Gothic novels, so this flair for the dramatic refines, rather than bogs down, her narratives and lends to the overall atmosphere of her dark worlds.

DARK DANCE is part occult horror, part vintage gothic, and part vampire legend. The main character, Rachaela Day, lives a dreary life in shades of gray. She grew up in a home where her father was absent and her mother was indifferent, and after her mother's passing, she just started going through the motions. She lives alone, has no friends, no hobbies, and is woefully underemployed. She's content with this until one day, people representing her father's family, the Scarabae, request that she return home. To her family.

Rachaela refuses initially but fate - and the Scarabae - have other ideas, and before she's really aware of what's happening, she ends up in a private car to a small British town in the middle of nowhere where the names are always changing and the train never seems to run. In a large manor in the moors, where all of the windows are brilliant stained glass, the Scarabae are there to welcome Rachaela with open arms, including her father, Adamus Scarabae. He's fascinated with her, and hasn't aged a day since Rachaela's conception nearly 30 years ago. But his interest is sinister, as magnetic as it is repellent, and Rachaela's efforts to escape the sinister family might not be enough.

It's been a while since I read a vampire novel that was so unapologetically disturbing. There's shock horror, and then there's "I'm going to tell this story the way it should be told, even if it offends a whole bunch of people and has the censorious members of our community pounding down my door." This book is the latter. Trisha Baker's CRIMSON KISS is like that as well (indeed, Trisha Baker is one of the recommended authors for fans of DARK DANCE. Big surprise, there). What this means is that none of the characters are likable - especially Adamus, Rachaela, and Ruth - and this book features some very disturbing content, like the sexualization of children and incest.The upside is, it's not at all romanticized, in my opinion, and feels more like inevitable doom than a fetish.

New adult authors, take note. THIS is how you write a dark and disturbing story. Save your cutesy "don't read this if you're easily offended" mock trigger warnings. THIS is disturbing and gritty as it was meant to be: inevitable, alluring, and impossible to put down.

RIP, Tanith Lee. I hope you're raising terror among the angels up there in author heaven.