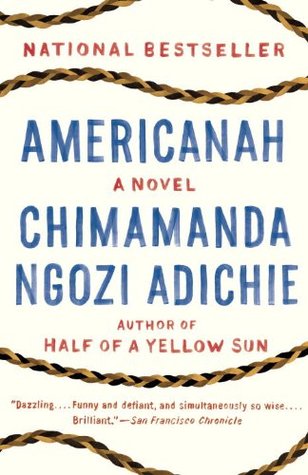 Chimamanda Ngozi Adichie is probably best known for her short but powerful essay, WE SHOULD ALL BE FEMINISTS. The essay is based off one of her TED talks and despite being short, really packs a punch in the feminist feels. She had a second essay, slightly less popular, called DEAR IJEAWELE, which I have also read. While not as popular or as powerful as WE SHOULD ALL BE FEMINISTS, it still has that personal, poignant element that made her first essay so popular. Adichie was clearly an author To Watch. That's why I was so excited when my book club voted to read one of her full-length novels, AMERICANAH. I'd wanted to pick up one of her works of fiction but didn't know where to start. My book club did me the favor of making the choice for me.

AMERICANAH is a very different beast from her other two works. WE SHOULD and DEAR are both essays written by Adichie herself, and she is a very likable woman who talks a lot of sense and makes very good arguments. In AMERICANAH, both of the main characters, Ifemelu and Obinze, are complicated, flawed, and not always easy to like. The plot is a bit difficult to explain, but if I were to summarize, I'd say it is about two young Nigerian lovers who break up and then try to make something of themselves in the West, only to find out that much of what they'd heard about both the UK and England is spin. Some things are better, others are worse, and when the two of them return to Nigeria, their Western experience has made them different, and colored their view of Nigeria in an irrevocable way, making them both feel like outsiders. Neither has forgotten the other, and their unique experiences bind them together when they finally reunite.

I liked Ifemelu a lot more than Obinze. I don't like cheaters and it bothered me how Obinze treated his wife, Kosi (although I didn't particularly like her, either). I feel like these two characters were meant to be criticisms of Nigerian cultural and gender stereotypes, particularly Obinze's entitlement and Kosi's hypocrisy, made more significant by the fact that Obinze is able to somewhat overcome cultural expectations and norms by the end but Kosi is unable or unwilling to. Ifemelu was amazing. She's the type of character that you either want to be friends with or can see yourself in, or both. I loved her blog, because it reminded me of Justina Ireland and Phoebe Robinson's writing (particularly the parts about racism, colorism, and the politics of black hair).

Ifemelu made so many great points about privilege, racism, colorism, white guilt, cultural stereotypes, and dog-whistling. There were so many things that made me think hard, and even made me feel uncomfortable, because it forced me to examine some unfortunate terms or phrases that I've employed in the past. That's a good thing, though. It's important to read books that make you feel uncomfortable and force you to reexamine how you interact with others, in my opinion, particularly since so many people are reluctant to discuss "race" or ethnicity, and even think the very act of doing so is racist in and of itself(!). I kind of wondered if Ifemelu's feelings of hypocrisy about writing controversial, inciting pieces and then giving "safe" workshops and talks was a reflection of the author's own experiences; I also thought it was interesting how she (Ifemelu) said that the workshops had different people, people who probably hadn't read her blog and would never consider doing so.

I feel the book weakens a little towards the end. I was not 100% on board with Obinzie and Ifemelu's reunion, since like I said before, I didn't really like Obinze and didn't consider him fully worthy of Ifemelu (although he tried at the end - quite hard, for him). I do think that their similar experiences made it that each of them was the only person capable of understanding the other, since being black and foreign in America/the UK made them an outsider to the people in those countries and having those cultural, "western" experiences made them outsiders to their own people when they returned home. It's the double-edged sword of the expatriate; you're always the outsider looking in. I've heard this sentiment expressed by my own friends who have lived abroad and it was bittersweet, seeing it here, in two desperately lonely people who only wanted solace and understanding.

If you enjoyed Yaa Gyosi's HOMEGOING, I think you will enjoy this book as well. This book isn't as nearly as dark as HOMEGOING, but it does confront many of the same uncomfortable topics, and it does so as written by a person of color, which I find that I actually prefer, as historically speaking, many of the books about Africa I've read that were written by white people are utter misery porn, in which the tortured main character is rescued by their own personal white savior who spirits them away to the magical paradise of the West. Blech, no thank you. This book felt honest, in that it portrayed both Africa and America as having their own unique problems, and confronted a lot of negative stereotypes and truths about both white and black people. If you can stand to read books that aren't comfortable, books that will make you think hard about stereotypes, books that will make you examine yourself, I recommend AMERICANAH. I can't wait to read Adichie's other books.