Disciplined by the Duke by Alyson Chase 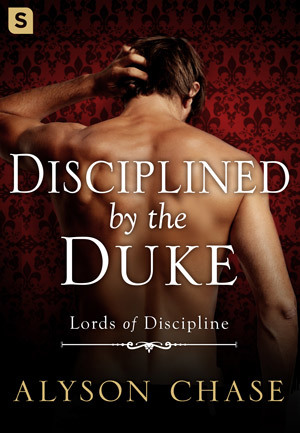 I blame Heather for making me want to read this book. She told me that there was a hawt villain in it, and I'm a sucker for those. I didn't even read the summary; I went to Netgalley and applied for the book on that premise alone. I read it cold.

Now that I've finished, I'm not quite sure how I feel about DISCIPLINED BY THE DUKE. For the first sixty pages, there was a decent build-up of sexual tension, a sinister and compelling villain, and a hero who was pretty hot what with his talk of forbidden play (although what's up with the Victorian edition of the Red Room of Pain on the cover?).

Elizabeth's sister is in jail for murdering her father (it's suggested he abused the sister, possibly sexually). Elizabeth says, many times, that she will do anything to save her, and this means putting herself under the employ of the nefarious and devilishly good-looking Earl of Westmore, who wants her to seduce the Duke of Montague in order to steal a letter that he desperately wants.

The Earl of Westmore is a great villain. I thought at first that he was the love interest (I have issues, I think), and then when I found out he wasn't, I thought he was going to be one of those villainous characters who ends up getting his own book later on (YAY :D). But no.

The author kills him off.

Anyway, Elizabeth arrives at the Duke's house and is determined to achieve the letter without seduction, but she's so attractive and of course she catches his eye immediately. And of course the Duke has a policy about not tupping the help but of course he makes an exception for her.

I mean, it's a romance novel, so I think we expected that, right?

Well, what I didn't expect were the silliness of the sex scenes. Milking, tunneling (c*ck gophers, anyone?), desire (used as a noun, to refer to various fluids), and mewl are used in abundance.

Here are some quotes that I found particularly jarring:

His thumb swiped around her clitoris...(130) Because her vag is a dating app? #SwipeRight

His cock was hard enough to pound a horseshoe into shape... (129)

Marcus was so hard he could pound nails with his cock (69).

I love that one of these quotes is on p. 69, btw. But also, was the author reading a book about blacksmiths while writing this book and thinking oh yeah, dip that ingot, pound that flesh anvil, wield the mighty c*ck hammer of sexual glory? I mean, maybe I shouldn't talk, since I once wrote an erotica novel comparing a c*ck to a Christmas tree (the veins were described as the lights, or something equally horrible - "garlanded by veins" may have been the phrase), but wow. Smithing level: 69.

I was willing to forgive the bad sex scenes though, since those are part of what make erotica so fun. Bertrice Small was famous for her "coral-tipped cones" and "honey ovens" and "coral-red flowers of womanhood wet and pouting with desire", and I love Small because she truly gave no f*cks. But what I could not forgive was the dumb.

Someone tries to kill Liz and she's just like, meh, oh well. She faints for no reason. She falls down in a field and then proceeds to lie there and freeze to death. Montague finds her, and then immediately after warming her up, has sex with her half-thawed self even though she says no. What. Liz betrays Westmore and knows she must act quickly to save her sister before he takes his revenge out on her, but of course there's time for one last round of hide the hammer in the tool-shed. Surprise, surprise, when she FINALLY gets her butt to the jail, her sister's been sent off to be hung.

I think the heroine herself sums this book up best: