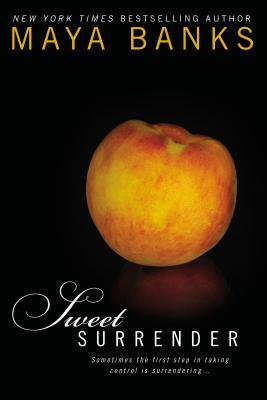 First, can I just say that I love how on the back of my edition it says "mature audience"? Like someone who isn't mature is going to throw up their hands and be all, "Whoops, I'm out." Just like how nobody ever lies on those websites that ask, "Are you really 18?" (Fun fact: once, when I was sixteen, I attempted to access an adult fanfiction site and a dialogue box popped up asking me if I was 18. Being the honest person I am, I clicked "no." I was booted and blocked from the site. Because yay, honesty.) This warning on the cover was just the first sign of the glorious things to come. (Tee-hee, come.)

And while I could totally take advantage of all the opportunities for giggles this book offers oh-so-temptingly, I have turned over a new leaf. I am going to try very hard (tee-hee, hard) to be mature while writing this review, because I no longer have to lie on internet pop-up dialogue boxes. I am a mature audience.

SWEET SURRENDER is about Faith, a woman who wants to be dominated and have a man call all the shots. Gray Montgomery gets involved with Faith because the man who killed his cop partner is associated with Faith's degenerate mother. The father of his partner, Mick, thinks that if he manages to get close to Faith, he'll learn more about the man who killed Gray's partner and be able to get revenge since neither of them really believe that the police department is doing their due diligence. Since this is a romance novel, you know that Gray is going to see Faith as more than a means to an end, though. Unless by "end" you mean "that booty.".

Well, it wouldn't hurt to read up on it. At least then she'd have a better idea of how to find this elusive creature: the dominant male.
God, she made it sound like an endangered species. But in today's world, she supposed they were. A dying breed. Emasculated by a politically correct society (26).

Was she just another woman all too willing to give up control in the bedroom, live for the fantasy then forget the whole thing the next morning? It wasn't as if he hadn't had his fill of those women.
Oh, they were more than willing to play a role, one that only extended to the bedroom, but when it was over with, they became a completely different woman.
He wasn't into pretend shit. He wasn't some damn puppet to have his strings pulled then be put back on the shelf until it was time to play again (52).

"More women wouldn't mind a man being the proverbial man of the house if he didn't abdicate his responsibility. If he took that responsibility seriously" (82).

While on her tour, Faith sees two men having sex:

When the first man gently moved his lips over the other man's cock, Faith's pulse began racing. The sight should repulse her. Something told her that it should, but just as quickly she discounted that absurd notion (117).

Um. Why should that repulse her?

While snooping in Faith's house, Gray sees the appointment for Faith's tour in her planner and decides to crash the party. He kicks out the Dom working Faith over and takes over. Afterwards, they talk about it - or Faith tries to. Gray tries to brush her off and then says:

By this point, I am side-eying Gray - GRAY, GREY, I sense a theme...men named after colors are controlling dicklords - like nobody's business. I really don't find the controlling, stalking, possessive alphahole stereotype attractive. I know some people do, but I don't - usually. Not here, certainly. And Gray isn't just a garden variety alphahole. He's the professor emeritus of Alphahole 101:

"Can we stop with all the touchy-feely shit?" Gray muttered. "You sound like a damn woman" (143).

Frankly, he'd rather suffer a case of blue balls before getting his dick wet in a chick with more dead space than a black hole (24).

When they actually start to negotiate the terms of their relationship, she tells him what she wants (as in, she describes her ideal scenario). Gray gets frustrated and stops. Then he says this:

"You've set the scene just as you imagined. You've scripted the role, my role, and decided how everything plays out. You've got every detail worked out in your mind. You're in complete control. No one else. I'm merely a puppet dangling on a string waiting on you to command me to command you and for you to tell me HOW to command you" (172).

"I don't work that way, Faith....I told you what I wanted. A woman who'd be content to let me call the shots. Nothing about this scenario is me doing anything but allowing you to dictate how it is we get together" (172).

I thought that was the point. The submissive is supposed to call the shots.

She dropped her face into her hands. Oh God, what a moron she was. She hadn't wanted a dominant man. Just the opposite. She'd been trolling for a mindless puppet (173).

Now that he'd laid it out for her, it seemed so clear.
Her idea of a man taking control had been handing him a checklist of activities to perform. She'd have been better off to hire a male prostitute and give him a script (180).

"If we do this, I will be in complete and utter control. There are no safe words, no playacting, no 'lifestyle' books to read. That's all bullshit. I've never lived by anyone else's rules and certainly not a bunch of rabid lifestylers all spewing what people do or don't do according to their list of guidelines....If that's what you're expecting, then you need to walk now. You can forget about anything you've read or experienced, because what I will demand from you bears no resemblance to what a bunch of role players screwing around with sex games would" (214).

The "guidelines" I imagine he's talking about are called SSC, or safe, sane, and consensual. Basically: a set of guidelines to prevent mental and physical harm, and ensure that everyone has a good time.

That is not what any relationship should be about.

"I'm not your parent. Have no desire to be placed in that role. We're both adults, and the petulant master/slave game bores me to tears. The little fake disobedient act so the master will punish the naughty little slave - it's ridiculous. If and when I spank you, it'll be because I like seeing my mark on your ass and because you'll enjoy it. Not because you disobeyed me. You're an adult with a mind of your own" (248)

Other random wtf moments:
-: On p. 229, Gray, the Omnipotent Sex Genius, uses soap as lubricant. I suppose he doesn't believe in urinary tract infections any more than he believes in risk-aware sex.
-: This line: He sure as hell wasn't going to bed with a hard-on the size of Texas (240). *swallows down the obvious joke* *barely manages to make it* *does* "Because I'm...so...mature..."
-: This line: "How many blows do you think I should give you before I stuff my dick so far up your pussy that you taste me?" (270) Thanks for the horrific mental image.
-: This line: "Sand up the woo woo would be a tragedy indeed. Especially since I plan to spend a lot of time up that woo woo" (275). What was all that high and mighty talk about being adults, hmm?
-: Like Sylvia Day, this author has a verbal tic. Unlike Sylvia Day, it isn't cream/creamy: it's blush. Which sounds harmless enough until you see the g-d word every other page. I almost wish I had the e-book so I could do a search to see how many times it was used. It had to be 50+ times...

I'll give this book some begrudging points for having aftercare and not using the word "cream" (well, okay, Banks used the word once and then seemed to realize what a poor idea that was and never used it again). I'll have to deduct half a point for the phrase "warm seed," though.

If that isn't your thing, throw the chair (and the table) and run. (┛◉Д◉)┛彡┻━┻