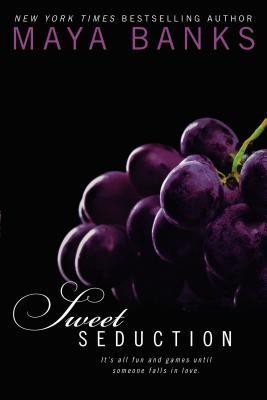 Once again, I'm back with the Sweet series. I've already read books one and two, and SWEET SEDUCTION is the third book in the series. I bought the whole series on sale because they had good reviews on Goodreads and instead of chucking them all in a donation bin, I've decided to get my money's worth and review each one of these books. If I can't enjoy them, at least I can make people laugh and save them from making my mistakes. As with the previous two books, this edition has a disclaimer on the back warning that the series is intended for a "mature audience." I'll see your mature audience and raise you an inappropriate joke.

SWEET SURRENDER is about Faith and Gray, and Faith's desire to be completely dominated by a man. Not in a bondage way, but in the 1950s man-of-the-house way. SWEET PERSUASION was about Serena and Damon, and Serena's desire to be a slave. Damon wants someone who will be a slave all the time (not just in the bedroom). Serena comes around to his way of thinking and the two of them are deliriously happy. The third woman in their trio of friends, Julie, constantly whines about being single and her unrequited crush on this guy named Nathan. She talks about how much she wants a threesome and is constantly pestering her friends to get her laid.

I like it when female characters own their sexuality, but it annoys me when their sexuality is their characterization (i.e. they can think of nothing but sex, and have no outside interests). That just doesn't seem healthy to me, and what makes it worse is that she's used like the comic relief in the previous two books, so not even the story line really takes her seriously. When she accuses Nathan of not finding her attractive in book 2 because he doesn't take advantage of her while she's drunk, I actively disliked her, and knew that reading her book - SWEET SEDUCTION - would be a chore.

The book opens with Julie in her massage parlor, getting ready to give Nathan a massage. This has been a source of sexual frustration with Julie for a while, because she gets to touch him but it's work, so she can't really do anything and he's resisted her attempts to seduce him. She doesn't understand why, and whines to her friends that she knows he has an erection because he refuses to turn over and only lets her massage his back and ignores her low-cut tops. Julie has decided to change that:

"You have two choices. You can shut up and not say a damn word until I'm done or I can gag you. In either case, I'm going to have my way" (6).

"I'm pretty sure what I'm about to do violates the code of ethics of my profession," she said huskily. "But you know what? It'll be worth it."

She yanks his towel off him and gives him a blow-job. Oh, how great, a woman owning her sexuality, you might think. Well, no...because that's...well, sexual assault. You can't just force yourself on people, and taking advantage of a position of trust, like a masseuse, is incredibly wrong. What makes it worse is that it's written in a way that makes me think we're supposed to go, "Yeah, you go, girl!" Like it's wacky hijinks. Julie's friends are even amused when they find out what she's done.

Nathan makes arrangements that one of the men be him, and after Julie is initially angry when she finds out later (the other guy is Micah), the two of them end up together. Then Nathan accidentally says "I love you" during sex and Julie flees, crying to her friends, who console her until Nathan bursts the door down and literally slings Julie over his shoulder to carry her away. Where? To happiness, presumably, which seems to involve copious amounts of questionably executed sex.

Weird sex descriptions:
-: Slowly he glided, rasping over her swollen, damp tissues (136). This is a favorite of the author, BTW. Variants of "swollen tissues" and "damp tissues" are used several times throughout the course of the novel, to the point where you might think that the hero has a fetish for used Kleenex. Also, for some reason, she often describes breasts as "plumped" and the hero always "stabs" into the heroine.
-: His d*** was straining upward, wanting her, reaching for her moist haven (161). You should really check out The Oatmeal's flowchart for occasions when it is OK to say "moist."
-: Her girly parts were singing at the idea (202).
-: "If you don't stop, I'm going to go off like a damn fire hose" (263).
-: "I've got a wood the size of a tree trunk..." (273)
-: "I wanna live in your p*ssy," he gritted out (277).

'Cream' Counter:
-: Zero, this time! It's used once, but to describe tasty cheese, which is OK. However the heroine "milks" something of the hero's that isn't a dairy cow, so I'm still going to have to deduct 50 points from Gryffindor. These are the rules.

Sexist lines:
-: "So if she wants another threesome, you're out?"
"Yeah. I'm not coming here again, and I'm hoping to hell she won't either. I don't like the idea of her being passed around like some piece of meat no one gives a fuck about. She's better than that" (172)
-: "I didn't want strange men fucking you. Damn it, Julie, what the hell were you thinking? You were just setting yourself up to be hurt or raped or God knows what else" (186).
-: It was just as well the impudent heifer learn to have him around, because he didn't plan to go anywhere, despite her repeated attempts to shake him (216).

Oh, and just in case you've forgotten about Faith and Serena, they have numerous cameos in here, too. Faith's story arc can neatly be summed up by a sentence: She'd called the wedding off, had a pregnancy scare and had eloped to Vegas all in twenty-four hours (119). Also, she accuses Gray of cheating on her, only to find out that he was secretly house-hunting to surprise her. Oops. Serena, on the other hand, frets about Damon proposing to her. This was a stupid arc and I was skimming by this point, but from what I gathered, she's afraid that the proposal would lead to guilt down the line because Damon might think she had only accepted his proposal because she is his slave. #OMGdrama

If SWEET PERSUASION was two steps forward, SWEET SEDUCTION was twenty steps back. By the end of the book, I hated both the hero and the heroine. Nathan seemed so innocent and shy and oblivious in the previous books: here, he became a raging alphahole who told women he wanted to strangle them and threatened to drag them out of rooms by their hair. Julie, the butt of the jokes in previous book, starts off the story with what starts as an unconsensual blowjob, and spends the rest of the novel being as unlikable as possible by casting aspersions on her friends' relationships and whining about her sex life.

I see that the next book is Micah's, and I actually like his character, so I'm hoping that he won't do a character flip like Nathan did. I'm a sucker for melancholy heroes with dark pasts and his is a doozy. SWEET POSSESSION and SWEET ADDICTION also look good (rock stars? heck yes!). Supposedly #5 is one of the best after #2. Maybe one of these next three books will be able to break the 1- and 2-star review streak that I've been on with this series. Tune in next time to find out!