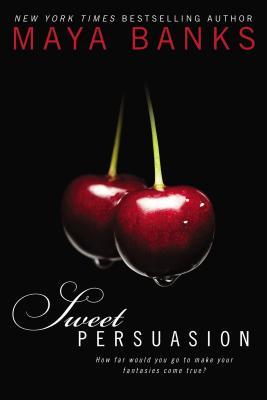 I recently bought the entire Fresh Produce Budoir Photos™‎ editions of the Sweet series on the cheap, because a) I am trash when it comes to used bookstores, and b) thanks to devious marketers, my brain has learned to make the association that dark cover + inanimate object = lady porn. Don't get me wrong; this nefarious camouflage not only tricks people into thinking that whatever I'm reading must be classy AF, it also makes it easier to sneak these books into lunch breaks or bus rides, but there's something about a risque cover with two people being caught in flagrante delicto that makes romance novels extra fun.

I considered cutting my losses and getting rid of the books, but you guys encouraged me to continue reading the series. Not because it gets better or anything, no you had no sweet words of hope to impart to me; you wanted to see me suffer. Well, whether I read the books or not, I'm out $10. Might as well get my money's worth, right? Right. (Oh, the things we do for love.)

Luckily for me, SWEET PERSUASION - which, like SWEET SURRENDER, is for a "mature audience" per its back cover - was a much better book than SWEET SURRENDER. Many of the things that annoyed me so much about SWEET SURRENDER were absent. Our main character, Serena, is the head of this company called Fantasy, Inc., which as far as I can tell is like a cross between an event planner and an anthropomorphized Groupon - she hooks people up with their "fantasies": if they want to be a chef for a day, she makes it happen; if they want to be princess of a cruise ship, she makes it happen (actual examples, btw). But the one fantasy she can't hook up is her own. Serena secretly wishes that she could be a man's slave, and give him total and complete control over her.

The relationship between Serena and Damon is actually decent, although the build-up of the relationship is better than the consummation of it. Banks just doesn't write very sexy sex in my opinion. She uses some very strange phrases (which I will list shortly) that pull you out of the moment, and she switches back and forth between her names for sex organs and acts, which is jarring (to me, anyway). It helps that both characters are on board, and unlike Gray from the previous book, Damon doesn't humiliate and browbeat Serena into giving in to what he wants. That doesn't mean that SWEET PERSUASION is totally light, though. It's a very edgy erotica that seemed to put a lot of people off with scenes including a public sex auction, flogging, anal play/sex, being whipped with a belt, and countless other examples of public humiliation, in which he does all these things and more to her in front of other men. The Scene that got many people upset just made me raise my eyebrows a little, because I've read so much worse at this point, but I was side-eying a lot of those anal scenes. Banks does actually introduce training before the sex itself through the use of plugs, which I have never seen done in an erotica before (so points to her), but then after that, Damon pretty much seems to stop using lube and just "goes for it" if you know what I mean, which sounds...um...no. Nope. So much nope. Nope.

"I won't use a word that encourages a man to disregard the word no coming from a woman's lips. If you say no, if you're even thinking no, then it ends for me. I won't indulge in silly little no-means-yes games. When that word crosses your lips? It's over. If I ever ask of you something that you won't give unreservedly, then all you need to say is no" (78).

I swear to blog, the male characters in these books love calling women's fantasies "silly little (nouns)." I do like how he respects no's (Gray did not always do this), but I didn't like how he took "no" as a complete and total shut down of the scenario - basically, a "no" seemed to mean that he would end their relationship completely. That's not really a fair choice, that's a "my way, or the high way." Also, there's a reason for safe words - sometimes people engage in play where saying "no" might be part of the scenario (i.e. "rape play") and you still need a safe, consensual way to stop.

As Faith did with Gray, though, Serena takes Damon's mansplanation of sex as gospel truth.

She wasn't even sure how to respond to that because he was absolutely, one hundred percent right. How moronic to ever discount the notion of a woman saying no (78).

Well, yes - but also not necessarily. Is using a safe word so hard?

Speaking of words, here are some...

Weird sex descriptions:
-: My pussy burns as if someone holds a fire to it (36-7).
-: Her shoulders shook, making her breasts bob, which rubbed her nipple rapidly across the fork (151). What the actual fork. Would you call that "fork-play" then? Or getting "forked"?
-: ...she lay there quietly, her body a receptacle for his (158).
-: Huge and swollen within her, he pulsed as his cock split her ass wide and he poured hot liquid inside her (218).
-: There was a multitude of sexual scenarios, from a simple one-on-one couple fucking like bunnies to an outright orgy with no less than eight people joined like LEGOs.
-: ...her orgasm swelled and then burst around her like flowers opening to the sun's rays (247).

'Cream' Counter:
-: Hesitantly, she raised her hands and then looked down at the sticky cream on her breasts and belly (148).
-: She could feel the creamy moisture gather between her legs (233).

Sexist lines:
-: "I'll be amazed if you don't order a girly salad. What is it with women always ordering salads, anyway?" (63)
-: "Nothing happened, Julie. If I had any idea you'd be worried, I would have called you. You were sort of out of it so I put you to bed. Someone spilt beer on your shirt and so I stripped you down. I didn't even look at you, I swear."
"Well why the hell not?" she asked in exasperation. "Am I ugly?" (172)

I also didn't like how heavily Serena's friends featured in here. You guys know I don't like Faith, and she was in here a lot, constantly blushing and gloating about her fantastic relationship. Julie, on the other hand, is a massage therapist who is trying to abuse her position to seduce one of her clients who she thinks is hot. She wears low cut tops, tries to make these professional massages sexy, and uses the information in his client folder to get in contact with him about personal matters. She's also the one who asked if the reason that this man (Nathan) didn't touch her while she was unconscious was because she was "ugly." I think it's safe to say that Julie is probably my least favorite character so far. I'm not looking forward to her book at all, and unfortunately, I think she might be next...

All, reservations aside, SWEET PERSUASION was, objectively, a vast improvement on the first book. The problem here wasn't the relationship itself - which was pretty okay I thought for a master/slave role play fantasy, especially since the author makes a solid attempt to introduce consent - but how it was written. The sex scenes are so cheesy. Some are sexy, which makes it even more disappointing when you happen across a bad one. I thought the drama in the last book was unnecessary (although no kidnapping attempts, thank God). What they were arguing over didn't feel like a Big Deal for me - if they had actually taken a moment to talk like adults, there wouldn't have been a conflict. But the build-up? Solid A+ for sexual tension. Damon's character wasn't ruined as I feared, and he actually had some genuinely decent lines, like this one:

"I won't allow you to degrade yourself for voicing your desires. They're yours. That makes them important. Valid. There is nothing crazy about them" (69).

If you're still interested in reading this series, I think I'd actually suggest starting from book #2.